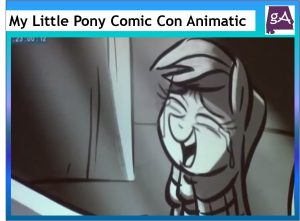 As you know season five My Little Pony: Friendship Is Magic is on a hiatus, probably until October.  Until season five resumes, I am going to post two animatics!  And yes, there are some spoilers!  The first one is a brief glimpse into the season 5 finale, you see Twilight Sparkle speaking at a lecture.  And when she gets back to her castle, a former villain is waiting for her!  The second video is going to be a good song featuring Lena Hall!  The second half of season 5 is going to rock!  And now you can enjoy the first half of season five on Netflix!