Today is Internet Slowdown Day, and since Geek Alabama focuses on more techy and geeky things, we are participating in this special day along with many other websites!  Sorry for the slowdown folks, but if the cable companies get their way, we will be living in the past and be like it’s 1995, when we had dial up. 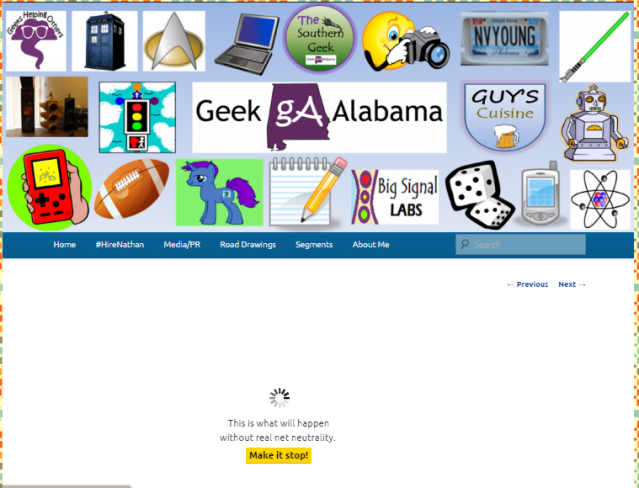 Sites like Geek Alabama have put up a loading symbol.  And there is a message asking people to contact the FCC and Congress to make sure “fast lanes” never see the light of day and Net Neutrality stays intact.  The FCC will begin finalizing its net neutrality proposal September 15 when it officially closes public comments on the issue. The FCC has received a massive number of comments on the proposal and it even crashed their website.  Here is my comment on the Net Neutrality proposal I submitted to the FCC.

I am writing to the FCC to express my concerns about Net Neutrality. Let’s get straight to the point, allowing the internet providers with ways to charge websites to allow a so called “fast lane” will be very bad for consumers, businesses, and everyday people. You know what is going to happen if Net Neutrality is taken away? Our internet will become like cable, and we will have to pay money to access news sites. Pay more money to access our social media sites. Pay even more money to access our video sites, and so on.

I run a popular website in the south called Geek Alabama, which is run off of WordPress. If Net Neutrality is taken away, I do not have the money to pay the internet providers to get on a “fast lane.” And many blogs, websites, and small businesses don’t have the funds either. I am asking you to re-classify the internet providers as a “public utility” and keep the internet open, free, and fast for everybody, no matter how much money each person has. America needs to get back to their helping others, small business roots, and quit catering to very large companies who only cares about making a buck. Thank you for reading!

As of right now, the new FCC rules would allow broadband companies to make websites and services pay extra for faster, more reliable access. Those that don’t pay for the faster access could lose traffic and a competitive edge from being unable to keep up.  This means sites like Geek Alabama and other smaller websites would lose readers.  And a “fast lane” would stifle innovation and free speech online.  Which is something sites like Google, Apple, and other techy sites are all against.

Here is what Google had to say about Internet Slowdown Day.  The Internet was designed to empower people. To get online, you need to use an Internet access provider. But once you’re online, you decide what to do and where to go. Anyone, anywhere can share their opinions freely — and any entrepreneur, big or small, can build, launch and innovate without having to get permission first.

We believe that consumers should continue to enjoy open on-ramps to the Internet. That means no Internet access provider should block or degrade Internet traffic, nor should they sell “fast lanes” that prioritize particular Internet services over others. These rules should apply regardless of whether you’re accessing the Internet using a cable connection, a wireless service, or any other technology.

Cable companies should not be allowed to set up toll booths and require sites to pay extra to be faster.  The end of net neutrality is just a way for cable companies to earn more revenue from people who are cutting cable (cord cutters), and streaming everything on the internet.  Hey cable companies, want to get more people to subscribe to cable again, allow people to choose the channels they want to purchase and watch!  This won’t happen anytime soon.

The internet should remain open and free!  Sites who can not pay to be on a “fast lane” would be buffered to death.  Even if someone has a great idea, the internet would be too slow to execute it.  And cable and internet providers would start nickel and diming everyone who wanted internet excess.   We do not want the internet to end up like cable TV today.

There is something you can do to help stop the end of net neutrality and the start of “fast lanes.”  Go to https://www.battleforthenet.com/ to learn more and to contact your Congressman.  If the cable companies win, the internet dies!  To learn more about this issue, watch this video from Last Week Tonight with John Oliver, he nailed it!

It's the redneck thing to do when a stop sign is down. Just twist tie it to another sign post.
Its not everyday a medical helicopter has to land in a parking lot.
A big lunchtime meal at Cookout is always good!
I guess some idiots out there have nothing to do better than spraypainting over stop signs.
We some unique one lane bridges around here.
There is one thing common about Alabama politicians. One, many of them are corrupt. And two, it seems like many of them end up in prison, like this Alabama politician here. Why write a book about it?
My new Power Smokeless Grill is doing an amazing job!
Oh oh, that school sign is turned in the wrong direction.
So will the NFL ever change their overtime rules or will they keep screwing the New Orleans Saints forever?
Here is something very unique about those using military time and the year 2020!
Here's my #2019topnine. A lot of favorites related to my #TheEmployables TV appearance and @geekalabama!
What is it with fast food joints and mac and cheese lately? Arby's brought it with their white cheddar mac and cheese. Very thick and creamy!
So, I thought the latest Star Wars was good. But come on, I want a movie where all the good guys die and the bad guys win. I was rooting for the bad guys in Star Wars.
Merry Christmas everybody!
Hey look, its a rare site. Walmart has closed for Christmas. And people are still driving up and a police officer is on a loudspeaker telling people its closed.
Does my new road sign look real nice where I park my car at?
Finally tried out Buffalo Wild Wings today. Their Asian Zing wings were great, and their cheeseburger was also good. I hope they come to Anniston/Oxford soon!
I just went inside the cave for Santa's Underground Workshop at Rickwood Caverns State Park, what a great experience!
I have now successfully completed mailing out all of my Christmas cards, glad I ordered more this year. Guess being on TV means more demand!
Here I am about to cover the Christmas at the Falls Christmas attraction at Noccalula Falls Park in Gadsden.
%d bloggers like this: