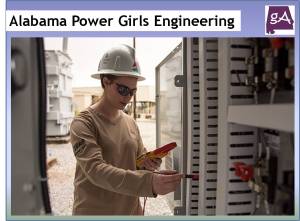 Amber Gibson did not grow up thinking she would be an engineer, but a field trip in middle school changed her mind.

“I was so adamant against going because I thought engineers drove trains or worked on cars,” Gibson said. “I was a dancer, I loved girly things, I had two sisters — girls ran my world, so engineering wasn’t an option.”

Gibson thought she would follow in the footsteps of her parents, who both worked in the medical profession, until the female engineers from Alabama Power she met during that field trip inspired her to realize the possibilities of a career in engineering.

“I just loved seeing these beautiful, powerful, brilliant women,” Gibson said. “Those women told me if I got an engineering degree, I could do anything. I liked that idea.”

Gibson stayed in touch with the women as she graduated from Hewitt-Trussville High School and went on to college to pursue a degree in electrical engineering at the University of Alabama. She now works at Alabama Power as a Protection and Control Field Services test engineer and, just an importantly, has joined her mentors in mentoring other girls through iCan Girls in Engineering, a program Alabama Power created in 2009 as a way to encourage female students to consider engineering as a career.

“I’m incredibly thankful for their devotion and kind hearts,” Gibson said. “It makes me want to do it for other people. It’s such a great cycle to continue.” 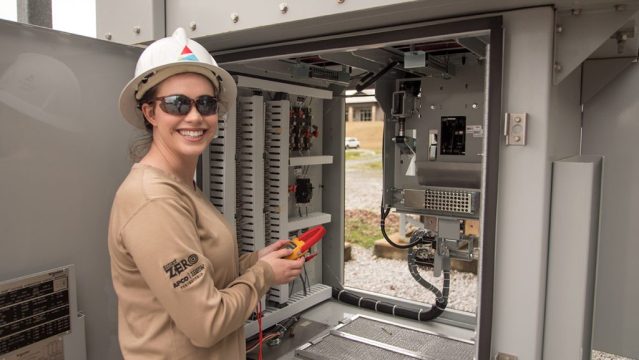 Gibson’s story is one of thousands heard across America this week as part of the National Society of Professional Engineers (NSPE)‘s annual Engineering Week, or E-Week, which began in 1951. NSPE uses the week to ensure a diverse and well-educated future engineering workforce by increasing understanding of and interest in engineering and technology careers. Gibson said sharing her experience is important.

“The goal is to replicate what happened in me in so many other girls,” Gibson said. “It’s also for them to get to meet each other and to have friends that are like-minded. This is not something that you’re alone in or weird, this is something that’s cool and fun.”

Gibson said she also appreciates her parents encouraging her to consider other career options.

“You can never get them to try too many things,” Gibson said. “I think I tried nine different sports, and I was never good at any of them. It’s OK to not be good at things, but it’s not OK not to try.”