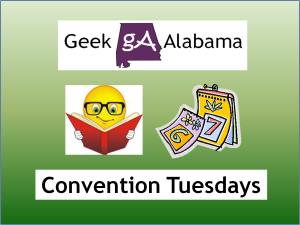 Welcome to Convention Tuesdays! Every Tuesday, I will feature and highlight conventions happening during the upcoming weekend in Alabama, or within short driving distances from Alabama.

Chattacon is an annual science fiction convention held in Chattanooga, Tennessee.  The convention is organized by the nonprofit Chattanooga Speculative Fiction Fans.

HAuNTcon will satisfy your every need with even more opportunities for new concepts, new ideas and new connections. This is the tradeshow where haunters gather to grow their business, be inspired for the coming season and unite with the community that is shaping the future of the haunt industry. From home haunters to pros, if you’re in the business of haunted attractions, agritainment, or escape rooms – you need to be in New Orleans. It’s time for something new. Innovation is coming.

The Gamefest is a family friendly tournament weekend with teachers available to help you learn new games. A great lending library of over 420 games is also provided. You can choose open boardgaming or tournament gaming.