This is a post I wanted to write on Friday, after the events that took place on Thursday night, but I wanted to think about, and reflect some more about what I wanted to say before I wrote this post. And plus, this post fits in more with a Sunday Discussion theme. On Thursday, I was at the library writing posts, and getting ready to take plenty of photos and a video of the Oxford Christmas Parade. And when 5 pm came, I left and began my walk to downtown, which was only about five blocks. Before I talk about what happened next, you all need to realize this. I am a huge animal lover, and many animals love me back. When I used to work at Fed Ex for example, I had several dogs who knew who I was. And they wanted plenty of pets, and dog bones when I delivered a package at their homes. And, my mom’s dog and cat really love me too! 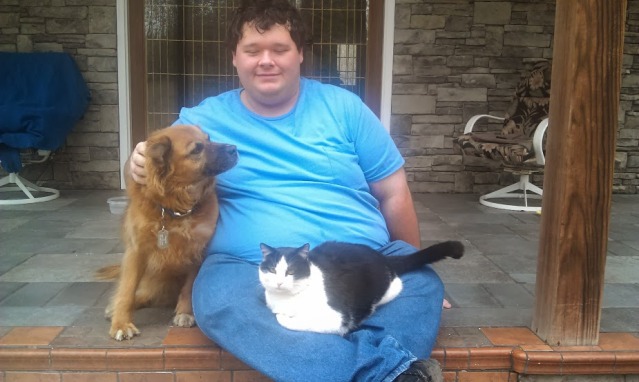 So, this part will be very painful, especially if you like dogs. I was near the parade route where people were already lined up to see the parade. As I was walking down, a small dog came toward me and was standing in the middle of the side city street. It was dark, but I knew what the dog was doing. The dog saw me, and knew that I was a friendly person. When I encounter most dogs, they figure about very quickly that I am a friendly person. Then, something terrible happened. A car was driving at about 25 mph and hit the dog. The tire from the car ran over the back part of the dog. After it was run over, you could hear the terrible dog barks and screams coming from this small dog. It was a terrible experience hearing that, and I saw the whole thing happen. Sadly, the dog had to suffer, and was dead a few minutes later. What happened next was not good.

I believe the small dog was a part of a family of five who was on the other side of the street. And yes, the kids saw it happen too. The three kids looked like they were under ten, and they were crying and screaming too after the accident. So, one of the kids decided to say the f*** word at me. And I thought, wow this kid has some bad language skills already. Then, after I was walking around and was in disbelief. I wanted to make sure the dog was not suffering, and one of the adults wanted me to stay far away, because I guess I ruined their kid’s Christmas or something. And to make sure I stayed away, he pulled out his concealed gun. Yep, kids saying cuss words and another person pulling out a small gun, that’s Alabama for you. To sum things up, I just kept walked down towards the parade route, and tried to forget things. Then I sent out this social media update.

Well, just watched a dog get run over, kids cussing me out, and an adult pointing a gun at me, Merry Christmas everyone.

During the parade, I talked to several people along the parade route. I talked to one couple from Trussville, who were very happy and had a wonderful attitude. It helped to make me forget about the earlier dog run over episode. But after the parade ended, I encountered a few young adults from Oxford, who were extremely rude. And to make things even worse, while walking down the side of the street after the parade, a car with some people inside called me a few bad cuss words, then a slice of humble pie happened. That car got into a bender-fender with a car in front of them, when that happened, I ran for it. I ran across Quintard Drive and went inside the Quintard Mall to cool off, while enjoying some candy I picked up from the parade route.

Being threatened with a gun, and being called bad names, it was such a wonderful night! Yes, the parade was great, but that was the only thing good that night. After I cooled off, I began to walk the three miles back home. I had one driver swerve towards me and went into the grass to try to hit me. And I had another driver throw a can at me. I am used to things like this, and I have had quite a few drivers yell cuss words out of the window towards me, swerve towards me, or even throw things at me. I am used to this, and this happens to other people who walk or ride a bike. The good thing was it was late, and I had the road to myself most of the time. It’s comforting to walk on the side of a lighted road in the dark. It gives you plenty of time to think and reflect.

Then, someone from the local TV station drove up, and I got to take a very short ride in a car back home. This person knew who I was, and she told me something else I needed to know. It was not much, but it pretty much confirmed what I knew. For a few years, I helped out the local TV station and pretty much started up their social media, and I did this without any pay. Soon, things began to change on that front too. I was pretty much pushed out the door, and to make matters worse. They actually brought in someone else, and paid them to take pictures and run their social media. So, push out a reliable person who took pictures and did social media for free, and bring in someone else and pay them, that’s Alabama for you! Anyways, this person told me that the manager did not like me, and wanted me out ASAP. So much for helping them out!

So, after I finally got home, I just went to my bed, laid there, thinked, and reflected. It has been a rough road for me here in the Anniston / Oxford Metro, and these problems, all happening in one night, were tough! I mean, we have many small businesses struggling and closing down. We have other people with anger issues, and would rather abuse animals and other people instead of getting help, and we have corrupt leaders who are determined in keeping the Anniston / Oxford Metro as the worst performing metro area in America. Yes, I talk about issues like this, and some people hate it when I open my mouth and write. Someone’s words can have a powerful impact on certain things. And it’s not like I want to keep talking about this metro area being in the dumps. But, when we keep being ranked as the worst, and nothing good happens, I am going to talk about it.

It’s almost like a TV network should consider making a reality show based on people here in Anniston / Oxford. If you want to experience what Survivor and Big Brother is all about, from the backstabbings and lying to get ahead, come to Anniston and Oxford, you will not be disappointed! For example, the owners of the local newspaper and local TV station do not like me, and one has even backstabbed me in the process. So, when I was the only person taking photos and video of the Oxford parade, I made sure they knew it!

Anniston Star or TV 24 did not cover the Oxford Christmas Parade, but I did! See coverage at:http://t.co/Wsr6KSwDJL pic.twitter.com/8C1VJ0DlJs

So, where do I want to go with this post? For starters, I know my time is pretty much up in this metro area, and I am pretty much unemployable. I had many people from bus drivers, people visiting, and radio DJ’s telling me to leave. Heck, I helped one local radio DJ on Friday and she told me that one person she knew moved to Nashville, and had several job offers quickly. When others say this metro area is a “welfare city” and a “depressed city”, they are telling the truth. Some businesses only survive on people getting food stamps, and I have told several people to not open a business in this town. Sadly, some have and soon shut down after opening. The economy is not the only thing wrong with Anniston / Oxford, many people also have some anger issues, and I think it’s because the economy sucks here.

About two weeks ago, I had another episode where someone called the police on me simply for walking on the side of the road, and it happened in Oxford. Soon, the Oxford Police came out, talked to me for a few minutes, and nothing pretty much happened. I am growing tired on the people who call the police on me, try to hit me with their cars, throw things at me, and even threaten me on social media. Heck, when you have someone who lives in the same apartment complex you live at threaten you on social media, you know this metro area has some major issues. 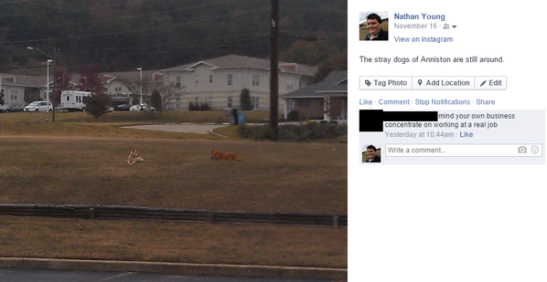 I think people here in Anniston / Oxford needs to take a chill pill. And heck, I will add in people here in Alabama too! I know some of you hate it when I expose more corruption in this corruption rich state, or I expose more problems in this metro area, or I expose someone else doing something wrong. This is what I do! Seriously, I always think what would happen if I was living somewhere else, where people don’t have these anger issues, and don’t continue to backstab and lie to others. I think if I was living somewhere else, I would be hired by now, doing what I do now on Geek Alabama. And that is saying something.

For the folks here in Anniston / Oxford, we have a major need for help here. How about making sure all the kids on the Salvation Army Angel Tree gets adopted? How about making sure everyone who is homeless has a warm place to stay? How about making sure the ones who are unemployed gets a job? And how about making sure we have the right people in charge to make this metro area better? Is that too much to ask for? For the next 18 days until Christmas, I have plenty of videos, event coverage, photo opportunities, presentations, Google hangouts, and Christmas coverage lined up. It will also include the non-stop job search, where I am only looking for jobs not around here, since most deem me unemployable here.