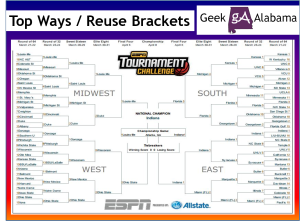 Let’s be honest.  When you filled out your March Madness bracket.  You were hoping you would at least survive until the Sweet 16.  You had that slight glimmer of hope that your bracket would be perfect and you would have won a lot of money.  Then reality came crashing down! 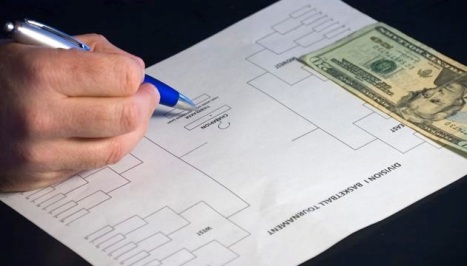 The first upset was Harvard beating New Mexico on Thursday night.  This was the beginning of the bracket destruction.  On Friday, the Ole Miss and La Salle upsets made more people cringe at their brackets.  And then Florida Gulf Coast delivered the dagger when they beat Georgetown.  Everyone’s hopes of bracket domination were over before they even had a chance to begin.

So now that everyone is looking at a worthless piece of paper that will lead you to maybe a small office pool win.  Why not use your now worthless bracket to bring some good into this world?  Here are the top 5 ways to reuse your busted NCAA bracket.

5. Use you bracket as decorative gift wrap: Nothing would be better than using your worthless brackets as nice gift wrap.  Your loved ones will notice all of that red ink and black marks as many of your bracket picks were proven wrong!  Then you will get the feeling that spending so much time on your brackets was silly in the first place!

4. Dry the tears from your eyes: Admit it; you are probably shedding a tear or two right now.  You were hoping you had the perfect bracket that would win you a million dollars, a new car, or office bragging rights!  But after the upsets, reality came crashing back in again.  Go ahead, use your busted bracket to wipe away your tears.  Maybe you’ll pick up some of that red ink you had to use, poor thing!

3. Write a love poem to your wife: You spend much of March Madness in front of your TV while ignoring your wife and loved ones.  Not only you watch every minute of basketball on TV.  You crunch the numbers and sometimes pray that your picks will avoid the next upset.  All of this is going on while your wife is plotting her move to get revenge for ignoring her.  Writing a love poem on the back of your busted brackets will show her that you had it wrong all along and you should have spent more time with your wife!

Don’t feel bad-looking at your red ink filled bracket.  You are in great company as everyone is not perfect.  You will have an entire year to think about where it went wrong until the next March Madness!

I had to celebrate after being attacked by some Anniston city council people tonight. A Blizzard from @dairyqueen does the trick!
I'll be holding this sign tonight during the Anniston City Council meeting. The corruption and madness needs to end now!
Here comes the train again...
Candy is cheaper than therapy. I would 100% agree with this!
Minnie the dog is very happy I'm here! #dogsofinstagram
Here taking pictures at the Gadsden Kiwanis Pancake breakfast. Great crowd! Come on out!
Happy #valentinesday2020! Did you know I'm 33 years old and I have never dated? But I truly love something, my classic 4-way traffic light.
Wait, was gas here really under $2? It was, for like two days.
The famous curve on Noble Street that took everyone's internet out last week just saw another wreck. So, when will Anniston make this curve safer?
I'm at another doctor's office this morning and it could involve something big. More information coming soon.
Fun fact: while filming #TheEmployables they set up cameras on the hood of the car facing towards the driver. These scenes never made it into the show.
Happy #nationalpizzaday! Eating a pizza pocket and watching the #oscars as well.
My face when everyone around me got some snow and I didn't. This snowlover is very disappointed.
Can you see it? Its snowing!
Apparently everyone where I live has no internet. A drunk driver hit a pole. Tip for Sparklight, maybe have a back up route for internet service next time.
Yum. Good to have some @tacobell after staying up most of the night due to bad weather.
What in the world did I watch tonight? That was the most hateful, bigtory #SOTU speech ever. It was a cheap reality show. And giving Limbaugh the Medal of Freedom, shameful!
Fun times. Watching the Alabama's Governor State of the State, and then the State of the Union. Fun times. #SOTU
Meanwhile, Bagel the cat is in tip top shape for the #kittenbowl. #catsofinstagram
Minnie couldn't participate in the #puppybowl today. She's too tired from hiking yesterday. #dogsofinstagram
%d bloggers like this: