Explore The Art Of The Locomotive With Powerful Images And Videos

UPDATE: This post is written by Marti Webb Slay from Alabama NewsCenter.  Learn more at: http://alabamanewscenter.com/

Ken Boyd, environmental specialist for Southern Company in Birmingham, might amend that to say, “There isn’t a train I wouldn’t photograph.”

He has amassed over 400 images of locomotives from across North America and some from Europe, and 188 of those have been published in “The Art of the Locomotive,” a coffee-table book containing pictures of steam, diesel and electric locomotives.
For a book filled with still images, it is a powerful and moving depiction of the history and technology of the locomotive.

“I’ve always been interested in photography,” Boyd explained, “particularly historical subjects and nostalgic imagery. I started photographing trains where Birmingham’s Railroad Park is now, at the old railroad graveyard there.

“One day my wife and I were going through my old photos, which I kept under the bed, in drawers, and scattered about the basement, and she and others encouraged me to consider putting together my train pictures as a collection,” he said. “I worked on scanning those negatives, slides and prints, touching them up and bringing them up to digital-quality standards. When we looked at that collection, we realized it was fairly historic. We started talking about a book project.”

Boyd wrote a proposal for the book, and it was picked up by Voyageur Press. They asked for 150 images, but they wanted only locomotives. That stipulation eliminated some of the photographs of cabooses and other train cars Boyd had hoped to use, and he began traveling the country to find more locomotives.

While most books on trains focus on a particular railroad or region, Boyd’s collection is high level and crosses those more traditional boundaries.

“I didn’t know a lot about trains at first,” he admitted. “The easier way would have been to go local or regional, but I didn’t know enough about a railroad or a local area to go into that much detail. Fortunately, I had documented my work as I took my locomotive photographs – who made them, when they were made, a few interesting facts about them – so I was able to use early pictures from my collection.”

Each picture is accompanied with a short description, which Boyd wrote. But as the title suggests, it is the photographs that dominate. He spends hours preparing each image. 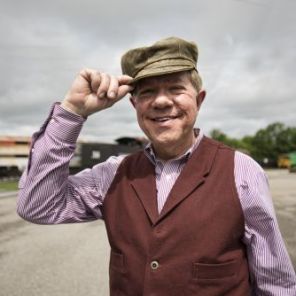 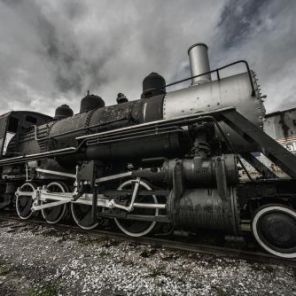 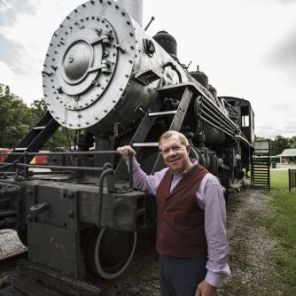 “My approach to photography is not documentation so much as it is fine art,” he explained. “I would characterize my photographs as made, not taken. I pre-visualize what I want, and I try to deliver a high-quality image.”

In other words, he may shoot a locomotive in a museum, but his final piece will have no sign of guard rails or display signs. In fact, the locomotive may even appear on a track or outdoors.

“I like to create a simple, clean image,” he said. “I take pictures of all the components and details, and then I piece them together for a realistic image. While I manipulate the photos, I try to make the locomotive look authentic. I don’t change the locomotive in any way that would detract from it. I just clean up the setting.”

Published in September 2014, about 10,000 copies of the book have been sold so far. Boyd has had to eke out time for book signings and marketing travel in addition to working at his full-time job and continuing with his professional hobby of photography.

Still, he has time periodically to look ahead, and he is already meeting with publishers about other projects: black-and-white locomotive photography or early locomotive history. He also has a collection of photographs of other railroad cars under the bed, where he found the locomotive pictures that started this journey. And he has photos of water and grist mills there as well.

“They were my main interest through the ‘80s,” he said. “I tried for years to get a book published on those, but that is a much smaller audience. Maybe now I can get a publisher who will be interested in that book idea.”

For now, however, Boyd is concentrating on the current project, with the requisite speaking engagements and book signings that come with publishing a book.

For more information on the book or to purchase it, go to Amazon. It may also be found at other bookstores such as Barnes & Noble and Books-A-Million.