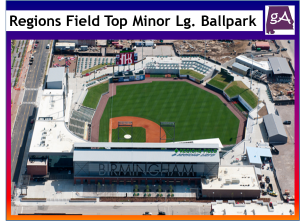 Regions Field in downtown Birmingham has only been open for a few years, but it has already gotten plenty of praise and success!  And now the website Baseball America just ranked Regions Field as one of the top minor league ballparks in America, and the best ballpark in the Southern League.

The ballpark is the home for the Birmingham Barons, and was opened in 2013 for a cost of $64 million.  Here is what the website said about the ballpark.

Baseball America determined the rankings with a survey of more than 100 people, including minor league general managers, radio announcers and others associated with the sport.  Congrats Birmingham!  See all the rankings from Baseball America at:  http://www.baseballamerica.com/majors/best-ballparks-minors/

Candy is cheaper than therapy. I would 100% agree with this!
Minnie the dog is very happy I'm here! #dogsofinstagram
Here taking pictures at the Gadsden Kiwanis Pancake breakfast. Great crowd! Come on out!
Happy #valentinesday2020! Did you know I'm 33 years old and I have never dated? But I truly love something, my classic 4-way traffic light.
Wait, was gas here really under $2? It was, for like two days.
The famous curve on Noble Street that took everyone's internet out last week just saw another wreck. So, when will Anniston make this curve safer?
I'm at another doctor's office this morning and it could involve something big. More information coming soon.
Fun fact: while filming #TheEmployables they set up cameras on the hood of the car facing towards the driver. These scenes never made it into the show.
Happy #nationalpizzaday! Eating a pizza pocket and watching the #oscars as well.
My face when everyone around me got some snow and I didn't. This snowlover is very disappointed.
Can you see it? Its snowing!
Apparently everyone where I live has no internet. A drunk driver hit a pole. Tip for Sparklight, maybe have a back up route for internet service next time.
Yum. Good to have some @tacobell after staying up most of the night due to bad weather.
What in the world did I watch tonight? That was the most hateful, bigtory #SOTU speech ever. It was a cheap reality show. And giving Limbaugh the Medal of Freedom, shameful!
Fun times. Watching the Alabama's Governor State of the State, and then the State of the Union. Fun times. #SOTU
Meanwhile, Bagel the cat is in tip top shape for the #kittenbowl. #catsofinstagram
Minnie couldn't participate in the #puppybowl today. She's too tired from hiking yesterday. #dogsofinstagram
I love those grilled chicken sandwiches from Waffle House!
I'm here for night two of the Anniston de-annex meetings in Golden Springs. And its packed in here.
When the power is out, you use a generator to get the traffic light back on.
%d bloggers like this: