Why You Will Not See The Alabama Phoenix Festival In 2015 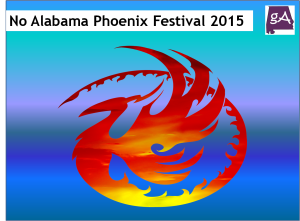 To go further into the details.  One of the event organizers named Tim Stacks went into further details explaining why their won’t be a Alabama Phoenix Festival this year.  He said:

As some of you may have seen on the Alabama Phoenix Festival fan page, we have decided not to have APF this year. It was not an easy decision for us to make, but was really the only reasonable course of action to take at this time. I’ll admit that the post was a little vague, but I feel that with the many guests, authors, artists, staff, and supports of APF that I’m friends with here on Facebook, that I owe you a little more of an explanation. Hopefully, this may satisfy some curiosities you may be having about why APF is not happening this year.

As some of you may already know, the employer that Steve and I both work for intends to sell his business or close it down at some point in the near future. We’ve known this since shortly after APF last year and had been holding out and waiting to see what happens. So far nothing has happened, but that could change anytime. As a result, for the past few months we’ve had to shift our focus away from APF and back onto ourselves and livelihoods until the situation stabilizes.

However, we are at the point now in the calendar year that we realistically cannot hold the event this year. The hotel would need to be booked right away if we were to even think about holding the event towards the end of the year, plus we realize guests need time to arrange the event in their schedule, not to mention all of the many hours of planning and organizing that must take place between now and then. It would be an almost impossibility to try and do anything properly this year; therefore, we decided to call off the event this year. In addition, Steve has decided to leave Alabama and is in the process of moving to Missouri.

I do want to say how much I appreciate each and every one that has been a part of or supported APF from the staff to the guests. I am extremely proud of this event and thankful to all that have helped it grown and thrive the past few years. Running APF has probably been one of the hardest things I’ve ever done, but ever so rewarding from all of the friends that I’ve met, some I even now consider as close to me as family.
As to what the future holds for APF, we’ll take a break this year and start evaluating things later on in the year and see how things are then. If you have any questions or comments, feel free to ask.

Godspeed Alabama Phoenix Festival.  I hope to see you again in 2016!