Last week, Nickelodeon announced a new kids game show which will premiere in Summer 2014 that revolves around, viral videos.  The show’s working title is “Go Viral” and will feature kid contestants as they compete in elimination challenges revolving around viral videos.  Each round will test kids on these laugh-out-loud videos – from predicting outcomes to guessing their popularity as voted by the studio audience.

Production on this series from Ryan Seacrest Productions is slated to commence early next year in Los Angeles and set to premiere in Summer 2014.  I have to ask, Viacom loves their shows involving viral videos.  There’s Tosh.0 on Comedy Central and Ridiculousness on MTV.  This got me to thinking, where are those quality kids game shows that I watched while growing up?  They need to reboot those instead of this.

This post is going to highlight the top five classic game shows that aired on Nickelodeon that I liked.  For the ones who are younger, Nickelodeon used to air some really good kids game shows.  Shows like Double Dare, Nick Arcade, Legends of the Hidden Temple, Get the Picture, Make the Grade, Finders Keepers, Nickelodeon Guts, and other classic shows like Wild and Crazy Kids and What Would You Do?

These classic game shows featured kids to think and even exercise.  All while having some fun as well.  I would always hope the kids would win everything on these game shows while I was younger.  I even wanted to be on one of those kids game shows!  So, what were my top 5 favorite kids game shows on Nick?

No doubt, if someone talked about a classic Nick game show, Double Dare is the standard.  The show features two teams who answered questions and went onto physical challenges.  Marc Summers hosted all the classic Double Dare episodes and he always started by reading this.

“I’m going to ask you a question, and if you don’t know the answer, or think the other team hasn’t got a clue, you can dare them to answer it for double the dollars. But be careful, because they can always double dare you back for four times the amount, and then you’ll either have to answer that question or take the physical challenge.”

The winning team then got to run the obstacle course which was the messiest minute on television.  The team had to complete eight obstacles in 60 seconds and grab eight flags to win everything.  The physical challenges and the obstacle course always featured some wacky games that were messy!  If you went onto that show, you were going to get messy!  Nick tried to reboot this show with Double Dare 2000 but it did not last long.  I think Nick needs to bring back this show because kids would be lining up to be on this show!  If you have not seen a classic episode of Double Dare, watch one below!

This show was very easy.  Two teams of two answered general knowledge questions and had to guess hidden pictures on a 16-square video wall.   In round one, an outline of dots representing something in a set category was revealed on the 16-square video wall.  In round two, an actual image was hidden behind the video wall.  Each of the squares’ four corners were marked with numbers, and each question had either two, three, or four possible answers.

Throughout the game there were Power Surges which featured the teams doing some kind of knowledge-based activity.  And the bonus round featured the Mega Memory, which the winning team had to use a nine-numbered keypad and take turns guessing correctly the right picture to the clue by pressing the right number.  This was something I wished I would do someday.  This was a great kids show where kids had to think!  Enjoy an episode below!

This show was popular because of one reason, it was like the Olympics for kids.  The three contestants had to compete against each other in four events that are based on skills in popular sports, such as basketball, baseball, football, and soccer. While most of these events include the use of an elastic harness, others make use of a wave pool, and sometimes a racing track is used.  Contestants earn points to their total score at the end of each event based on their performance.  First place in each event is worth 300 points. Second place receives 200 points, and third place earns 100 points.

The Aggro Crag is the fifth and final event.  All three contestants race to climb a fabricated mountain, activating a series of lighted targets commonly referred to as “actuators” on their way to the peak.  If a contestant misses any actuators along the way, a spotter at the top prevents that player from completing the climb until he or she returns and activates the target they missed.  The climb is made more difficult with special effects that simulated lightning storms in the form of strobe lights, rock avalanches, flying “snow” in the form of glitter and confetti, “nuclear flying crystals”, and steep walls.  Each contestant has a separate but identical side of the mountain to climb, and is not permitted to cross into another’s path. The first contestant to successfully activate each target, including the final one at the peak of the mountain, earns first-place worth 725 points.  The second- and third-place contestants earn 550 and 375 points, respectively.

This was a great show because the contestants had to show skill and were getting plenty of exercise!  Nick tried to bring back the show with My Family’s Got Guts, but it did not last long.  Enjoy an episode below!

Legends of the Hidden Temple 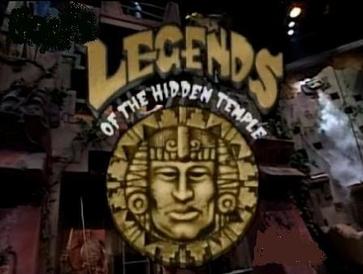 The other most popular Nick game show ever has to be Legends of Hidden Temple.  The show centers around a temple that is “filled with lost treasures protected by mysterious Mayan temple guards”.  Kirk Fogg hosts and serves as the teams’ guide, while Dee Bradley Baker announces and voices a talking Olmec Head who “knows the secrets behind each of the treasures in his Temple”.  Six teams of two children (one boy and one girl) compete to retrieve one of the historical artifacts in the Temple by performing physical stunts and answering questions based on history, mythology, and geography.  After three elimination rounds, only one team remains, who then earns the right to go through the Temple to retrieve the artifact within three minutes and win a grand prize.

The show was very cool to watch!  The first round always featured a physical obstacle across the moat and then the kids had to answer questions on the steps of knowledge.  Then the last two teams standing had to compete in three unique challenges.  The last team standing had to go through 12 unique separate rooms in the temple.  Some of the obstacles like that monkey room was hard.  And watch out for those temple guards.  I always rooted for the team to leave the temple with that artifact so they could win everything!  Legends was a great show!  Watch an episode below! 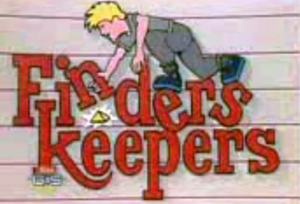 This was one of the first game shows for Nick.  But it was great to watch!  The teams had to find hidden pictures drawn into a larger picture based on clues given by the host.  Each correct item located earned $25 for the team and an opportunity to search one of four rooms in the house for that round.  The house consisted of eight rooms that could be whimsical versions of traditional rooms in a typical home.  And some of these rooms were very weird!

In each room, the host read a clue describing an object hidden within that room. The team had 30 seconds to find the object, and were given one chance to show it to the host once found. Each room in round one was worth $50, $100 in round two which went to the team if they found the object in the room.  If the team failed to find the object within the time limit, the opposing team was given the money. The opponents also received the money if the team showed an incorrect object to the host while searching.

The second round was played the same.  Whichever team had the most money after the last room was played won the game and advanced to the Room to Room Romp.  In the Room to Room Romp, the winning team was shown the order of six rooms to be searched.  The team was given 90 seconds to find a hidden object in each of these six rooms.  All six objects had tags attached, with each of the first five tags directing them to the next room and giving a clue for the object hidden there.  The object of the show was to make these rooms messy, and the kids did that.  I always felt bad for the workers who had to clean the mess up.  Watch an episode below!

Hey Nickelodeon, want to find a way to increase your ratings and beat Disney Channel, Cartoon Network, and Hub Network?  Why not dump some of these other kid shows and look at your roots.  Bring in creative people to create some unique shows!