The Richie Incognito Problems And Why Bullying Must Be Stopped 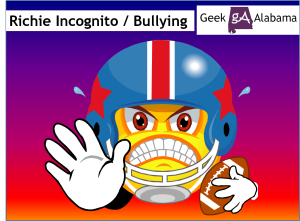 Bullying has gotten way out of control around the world.  It’s not just in schools anymore, people have been bullied at the workplace, while driving, while shopping, and even at home.  Bullying has gotten to epidemic proportions.  And us the people must find ways to end the bullying problem once and for all.  Sadly, bullying has now gotten into sports as well.  Over the weekend, Miami Dolphins player Richie Incognito was suspended by the team after he was caught using racial slurs and threats of physical violence in voicemails.

Even though Richie Incognito has been suspended, he will be kicked off the team.  In fact, his jersey number has already been pulled from the team’s store.  The player who was being bullied was Jonathan Martin, and he decided to take a leave of absence after his food was thrown into the floor in the team’s cafeteria.  Look, every locker room is going to have its general playing around and jokes like pranks, towel snaps, general ribbing, etc.  For a guy to just get up and walk away is something most everyone would never do, I think there is a lot more to this story.

Sadly, this guy has an extremely long rap sheet of offenses due to his reckless behavior from College all the way up into the NFL.  He was kicked off the team while at Nebraska and was even arrested for assault.  He then enrolled at Oregon but he was soon kicked off that team as well.  He then went pro and joined the St. Louis Rams but he racked up 38 penalties in 44 games.  He even criticized the fans for not cheering for the team when they were 2-8.  Of course the fans booed back at him.  In 2009, he was named the NFL’s dirtiest player during a Sporting News poll of 99 players.  He then had a verbal altercation with the head coach and was released.  He played three games at Buffalo and then he signed with the Dolphins.

I hope the Dolphins knew who they were signing, because he continued to get into trouble there.  He engaged at another player after a dirty play, he was involved in an altercation in a Miami night club, he admitted during an interview that he stays out all night partying and using drugs and alcohol, and he was bullying other players inside the locker room.  He’s already been kicked off 3 NFL teams.  And most likely, he will not be playing in the NFL again, a video like this from TMZ should warn any team who are thinking about signing him.  (This video has bad language)

After reading the comments from people on sports websites who are talking about this story, I wanted to add my own thoughts about this issue.  Many people have already commented saying the NFL is turning into a flag football league where it’s destroying its self wit and any snitches don’t belong in the league.  The NFL should not be home to anyone who causes problems in the locker room, on the field, and while not on the job.  Sure, there could be the occasional fight or altercation in the locker room, these guys are full of testosterone and sometimes it needs to be used.

Players who have had behavioral problems while playing in the NFL often don’t do very well.  Remember Terrell Owens, he came from the same high school I graduated from!  And now he is back home in Alexander City and was recently featured on Iyanla: Fix My Life.  Mr. Owens was known for his problems while on the field and he has found himself out of work and hopeless.  Hopefully Iyanla Vanzant helped Terrell Owens change for the better.  Other football players in the NFL, college, and even high school needs to remember this one rule.  If you become a bad player who causes massive problems on and off the field, you will not be playing football for long.

Workplaces needs to work with their employees to make sure bullying ends once and for all.  That goes for schools as well!  Bullying has become a massive problem across the world and some people just ignore the problems bullying is causing in our society.  I was bullied by many people while I was in school.  Even in the workplace, some employees were bullying me.  I am often a bully target and I get tired of other people who bully me.  People who bully others needs to know that you are hurting others, not just the ones you are bullying.  People who are bullied have often harmed themselves including committing suicide.  Do you want to know that you indirectly killed someone for the rest of your life?  If you are bullying others, please get some help!  I hope Richie Incognito gets the help he needs!

A Norfolk Southern train going onto the siding track.
Just me munching on popcorn and watching football on #nationalpopcornday
It's the redneck thing to do when a stop sign is down. Just twist tie it to another sign post.
Its not everyday a medical helicopter has to land in a parking lot.
A big lunchtime meal at Cookout is always good!
I guess some idiots out there have nothing to do better than spraypainting over stop signs.
We some unique one lane bridges around here.
There is one thing common about Alabama politicians. One, many of them are corrupt. And two, it seems like many of them end up in prison, like this Alabama politician here. Why write a book about it?
My new Power Smokeless Grill is doing an amazing job!
Oh oh, that school sign is turned in the wrong direction.
So will the NFL ever change their overtime rules or will they keep screwing the New Orleans Saints forever?
Here is something very unique about those using military time and the year 2020!
Here's my #2019topnine. A lot of favorites related to my #TheEmployables TV appearance and @geekalabama!
What is it with fast food joints and mac and cheese lately? Arby's brought it with their white cheddar mac and cheese. Very thick and creamy!
So, I thought the latest Star Wars was good. But come on, I want a movie where all the good guys die and the bad guys win. I was rooting for the bad guys in Star Wars.
Merry Christmas everybody!
Hey look, its a rare site. Walmart has closed for Christmas. And people are still driving up and a police officer is on a loudspeaker telling people its closed.
Does my new road sign look real nice where I park my car at?
Finally tried out Buffalo Wild Wings today. Their Asian Zing wings were great, and their cheeseburger was also good. I hope they come to Anniston/Oxford soon!
I just went inside the cave for Santa's Underground Workshop at Rickwood Caverns State Park, what a great experience!
%d bloggers like this: