The Funniest Spam Emails Of All Time

Let’s face it – spam is a part of life. Who hasn’t “accidentally” clicked on that amazing offer for a free cruise, winning lottery ticket or male enhancement pills.

Normally, these messages are discarded into the depths of our spam folders never to see the light of day again. Every so often, however, an email comes along that is so incredulous that it lives on in internet infamy forever.

Here are some truly ridiculous – and hilarious – spam emails that will make you forget all about that time you got a virus after clicking on that suspicious link.

Spam emails typically play on our innermost desires – our dreams of financial freedom, luxury vacations or a share of wild family fortunes. Sometimes, the messages are so insane that we can’t even decipher the spammers motive.

That’s certainly the case in this email. Reddit user George Rickson shared this incredible spam email that notified him his “time to realign with society has finished.” Apparently, the spammer wanted to notify him that his super special mission was starting and that he should expect a parcel to arrive with further instructions.

The exact motive for this email remains unclear. But the odds are it’s a vicious prankster hellbent on destruction. My money is on Jim Halpert.

This email comes compliments of Laura James, who kindly shared this epic story straight out of sci-fi movie. There’s so much to unpack here – from the “save the universe” plotline to the hilarious offer for an all expenses paid trip to the past.

The spammer clearly saw one too many movies as evidenced by his “many types of time travel” comment. Are we dealing with Back to the Future rules or Terminator rules? Sadly we’ll never know.

We do know that this adventure full of aliens, government equipment and “temporal reversion” would make for a thrilling action flick. I think I just got the idea for my next screenplay. 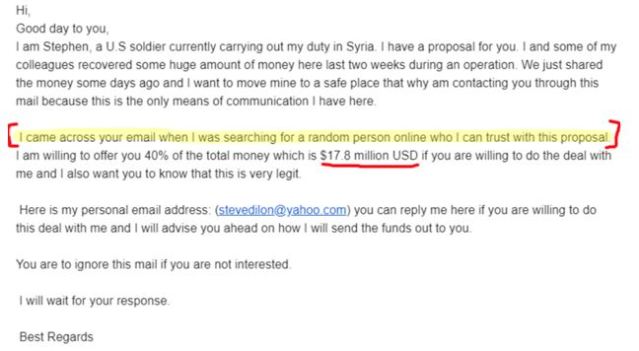 Spam emails require a certain level of attention to detail to be effective. It’s why they’re filled with elaborate stories about celebrities, fake charities and Nigerian princes. The devil is in the details. Apparently, this spammer didn’t get the memo.

Reddit user al3xisss shared this hilarious email, which starts like any other spam message. The story plays out in typical fashion: a soldier suddenly comes upon a windfall of cash and is looking to share the wealth.

The only problem? The spammer says he came across the email address when searching for a random person online. Really? That’s the best you can do.

He’s even unclear on the amount of money being sent. Is it 40 percent of $17.8 million or $17.8 million is the 40 percent? This spammer deserves an unhappy ending based on sheer laziness alone. Foreshame.

A Matter of Life and Death 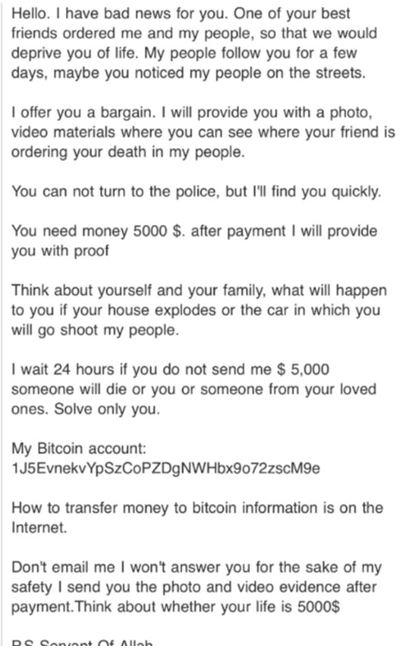 How’s this for high stakes? Reddit user StreamingrightnowHD received an unwelcome surprise when this spam email informed him he was the subject of an ongoing asassination attempt.

The polite hitman goes on to describe an intricate murder plot involving a good friend, an exploding house and broken english. Of course, the murder will be called off for the low, low price of $5,000 (in bitcoin)! The whole thing unfolds like the plot of a B-grade Liam Neeson movie, right down to the murderous threats straight out of Taken.

Let’s face it: we’ve all had our fair share of spelling errors. Still, you’d think that a spammer would at least have the decency to turn on spell-check before firing off their magnum opus.

That wasn’t the case for this spammer, whose anemic spelling would draw the ire of english teachers everywhere. The abominable email was originally sent to Reddit user Summary Executions.

In it, the spammer tires to blackmail the victim by claiming to have video evidence of them visiting a pornographic website. Even by spammer standards, it’s an incredibly weak email thanks to using words like “viruus”, “pornoo” and “onanism.”

The final sentence sums it up best: “Don’t forget about the shame.” Well, they can’t all be winners.

CHRIS PARKER is the founder of WhatIsMyIPAddress.com, the premier website for helping people throughout the world find, check or get details on a specific IP Address. Today, it attracts more than six million visitors monthly thanks to its IP address-related tools and easy-to-read, informative articles.