UPDATE: This story is written by Solomon Crenshaw Jr. for Alabama NewsCenter.  Learn more at: http://alabamanewscenter.com

Only twice this football season has Haley Jackson been at a Jacksonville State home football game. Instead, the senior marine biology major has been working as a waitress at Struts Wings restaurant next to Burgess-Snow Field.

But Jackson’s hands won’t be on a serving tray or a pitcher of some beverage Saturday, Jan. 9. Instead, she will be among more than 4,000 Jacksonville State fans who make the trek to Frisco, Texas, for the Football Championship Subdivision title game against four-time defending champion North Dakota State.

The game kicks off at 11 a.m. and can be seen nationally on ESPN2.

“As far as I know, everybody’s either making that 10-hour drive or they’re getting on a plane and going out there,” Jackson said Monday. “Tickets were so hard to get. They sold out between the students and all that. Everybody I know pretty much is going to the game – all my friends, students, family, alumni, everybody.

“It’s a small town doing something big. We’ve never been anywhere close to anything that big.”

Well, not in her lifetime. The Jacksonville native was born in November 1993, a year after the Gamecocks claimed their one Division II national championship. Greg Seitz, the JSU senior associate athletic director, said the football team will have its share of supporters at 20,500-seat Toyota Stadium.

“We’ll have close to 4,000 there,” Seitz said, adding that the JSU band is also going. “We expect to have about 4,400 folks there for us. It’s been since 1992 since we’ve played in the national championship.

“That was in Florence, Ala., which was close,” he added. “This one’s a little different, being 10 hours away, but our fans are certainly excited.” 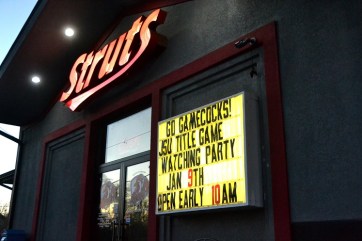 The student body was still largely absent from its holiday break on Monday but there were subtle signs of the building excitement, including an electronic billboard beside Pelham Road that counts down the days and hours until kickoff.

Leah Stephenson of Hartselle is a junior second-semester nursing student who works in the campus bookstore. She was confident that exuberance for the game would be evident once her fellow students return next week.

“Once school starts back and everybody’s back in town, everybody’s going to be really excited,” she said. “I’m excited.”

The title game is having some effect on the Jacksonville economy.  Jane Lewis was shopping for some warm Gamecock gear at the campus bookstore for her trip to the Lone Star State.

“This gave me the impetus to go out and buy something so I can be warm,” she said. “It’s supposed to rain, at least the last time I looked, so I want to be warm and dry.”

“My husband and I both are alumni of Jacksonville,” she said. “We saw this opportunity and decided that we would go and support our team because this is probably a once in a lifetime opportunity to see our local college representing on a national level.”

Shirley Lumpkin said Jacksonville Bookstore will be open Saturday and she hopes, as always, that the store does good business.

“But I doubt it because they’ll be at the game or watching it.”