UPDATE: This post is written by Solomon Crenshaw Jr. for Alabama NewsCenter.  Learn more at: http://alabamanewscenter.com/

In all his years of handling concessions at Legion Field, Robbie Yarbrough said he had never seen what he saw Sunday before the U.S. Women’s National Soccer Team beat Haiti 8-0 in a friendly match.

“I’ve never seen lines this long,” he said. “There were thousands of people at every gate at 11:45. Generally people trickle in. This crowd wasn’t that way. They showed up the minute the gates opened.”

That crowd would eventually reach a record 35,753, the largest ever for a stand-alone WNT match in the southeastern United States.

“These women are rock stars,” Yarbrough said of the World Cup champs. “The crowd reacts to them like the crowd reacted to the Rolling Stones here in ’96.”

Tickets were sold in 46 different states and the economic impact was right at $10 million, according to the Greater Birmingham Convention and Visitors Bureau.

“With more than 33,000 tickets sold, this was a record-breaking event for women’s soccer in the Southeast,” GBCVB president John Oros said. “This is the sort of successful event that Birmingham is noted for in the sporting world. We credit the Alabama Sports Foundation and the City of Birmingham on this chance to chalk up another big win.” 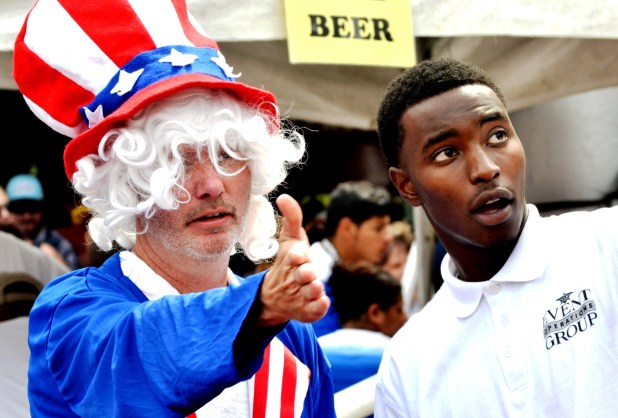 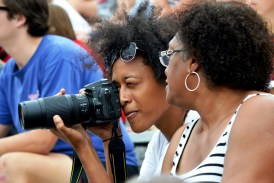 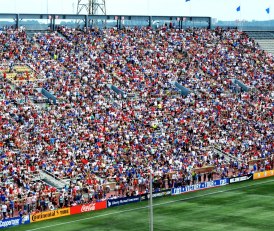 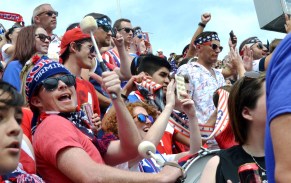 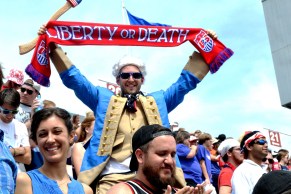 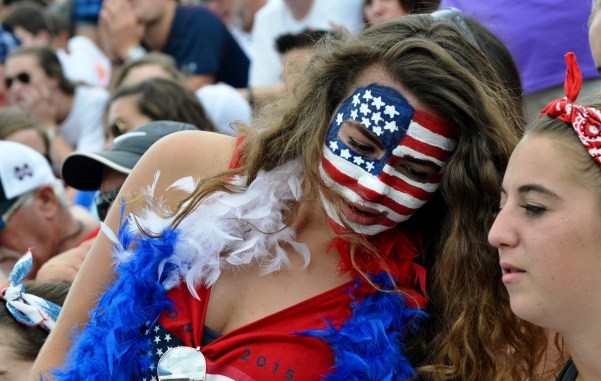 Red, white and blue were the colors of the day as fans from across the Southeast and beyond descended on the stadium. This was a patriotic party, a soccer revolution complete with Uncle Sam and George Washington.

Kickoff was just over an hour away when Jason Sullivan of Jackson, Tenn., entered with his family. He was hard to miss, dressed as the symbol of U.S. patriotism, Uncle Sam.

“My family is big U.S. women’s soccer fans,” he said, referring to his wife and his three soccer-playing daughters. “This is our first big soccer event but they all play travel soccer.”

Chris Blinn admitted that he was more than toasty dressed as the father of our country, George Washington.

“It’s all for the American team,” the 30-year-old said. “You’ve got to sacrifice. This is going to be one of my first opportunities to actually see the team so I’m excited.”

Blinn was part of the merriment that could be seen and heard throughout the day in Section 19 beyond the north end zone. He was one of the 700 members of the American Outlaws in attendance.

“It’s crazy. It’s bigger than the bowl game we had here in January,” he said. “I haven’t seen anything like this at Legion Field since I saw the U.S. play here in ’05. It’s huge.”

Tammy Barnes drove five hours Saturday night from Lexington, S.C., one of six in a Toyota soccer van including her husband, their daughter Riley and a few of her Liverpool under-12 soccer teammates.

The match was just shy of a minute old when the Americans began filling the Haitian net. Huntsville’s Nicole Matis would have loved to have seen Australia, the original opponent for the U.S. before that national team went on strike over compensation. But the 17-year-old soccer player wasn’t disappointed.

“I think it’s great because they’re scoring a lot and we get to cheer it on,” she said. “This is still awesome. I love seeing goals.”

Gene Hallman, CEO of Bruno Event Team, which organized and managed the match at Legion Field Sunday, hinted on Facebook that the Magic City hay not have seen the last of U.S. Soccer.