This was going to be my Animation Monday post, until we learned about the end of Saturday morning cartoons on broadcast TV.  But, last weekend our friends from the Hub Network premiered a new cartoon called Teenage Fairytale Dropouts.  The show is a Mexican-Australian-Irish animated series, created by Martinez Vara Adolfo and José C. Garcia de Letona.  I like how cartoons have gone international now!  The cartoon is loosely based on the 2003 Mexican animated film, Magos y Gigantes, and the series was created and produced by Ánima Estudios and co-produced with SLR Productions, Home Plate Entertainment, and Telegael.

Here is a very interesting fact you should know about!  The Hub Network acquired the United States rights to the show in April.  This was the first time a major American cable network has bought a Latin American animated television production for channel transmission, as the series was primarily produced in Mexico.  According to the Ánima Estudios executives, it nearly took nearly 2 years for the show to enter the U.S. market. This also marked a history for the studio, as this was the first time they entered a major U.S. market.

So, the series takes place in a fairy tale-like setting. Three best friends, Jeremiah, the son of the giant in Jack and Beanstalk, Trafalgar, the nephew of Merlin the Wizard, and Fury, the daughter of Tooth Fairy, live through a tough life as teenagers and are determined to be themselves, despite their parents’ orders and their fairy tale origins.  The teens attend school in this fairy tale type setting that is kind of interesting.  Think of your lesser known fairy tale characters, all together attending school.  That’s the show! 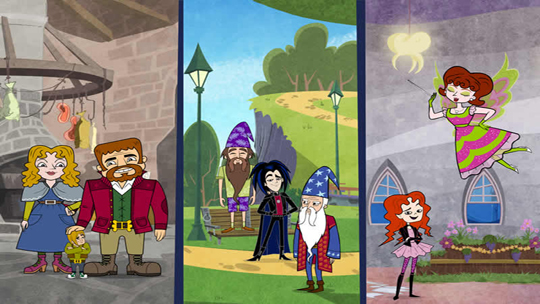 The first episode shown was not the first episode of the series, the first part of the episode, called “Triple, Double Trouble”, featured Jeremiah developing three heads, on the same body, all while attending a school dance.  The second episode called “Mascot Madness” features the friends taking care of the school’s unicorn mascot, who spits out rainbows, called Kissy Twinkle Toes, who has a very high-pitched voice for a horse!  Could you tell that the Hub Network is wanting the My Little Pony fans to tune in.

Anyways, I thought the show was animated very well for Adobe Flash.  I am surprised it took over two years for this show to be brought into the U.S.  The show’s lessons is simple, the children of the famous fairytale characters are determined to be themselves, regardless of what their parents want them to be, in other words, be yourself!  I did not find myself laughing too much, and there are plenty of slapstick moments in this teen comedy series.  I kind of wished Hub Network would have started the series by showing the first episode, instead of airing the episodes out-of-order.

Teenage Fairytale Dropouts is a good pickup for Hub Network for the Summer and Fall, as it’s airing alongside the third season of Littlest Pet Shop.  And it’s a placeholder until new cartoons premieres, including Kiss Hello Kitty, the new Transformers animated series, and the fifth season of My Little Pony: Friendship Is Magic.  I am just glad to see animators out of Mexico seeing some success on American television!