I would consider this my Animation Monday post for this week.  Some of the guests at the Alabama Phoenix Festival were very talented animators.  The festival had the comic area where you could see comic book animators and people who love to draw do their work! 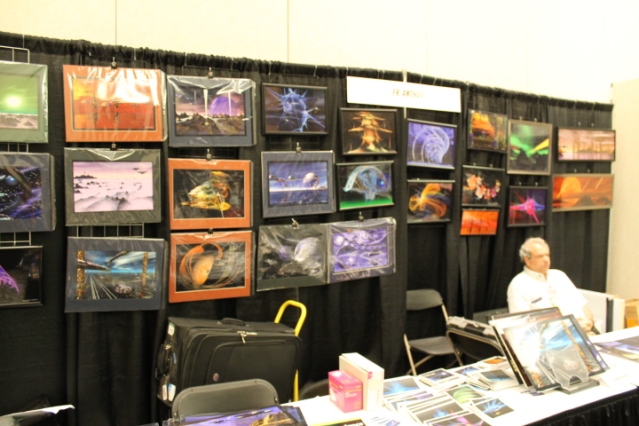 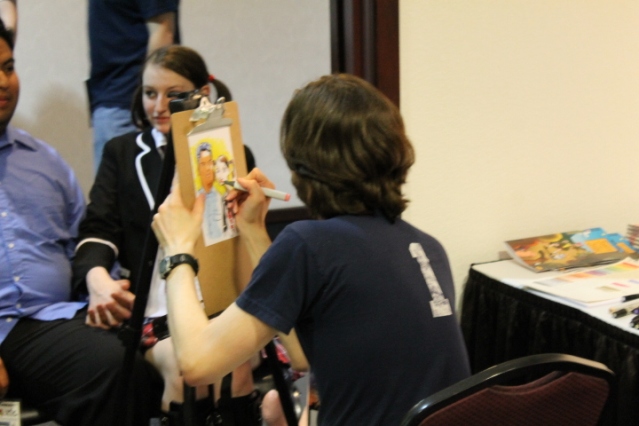 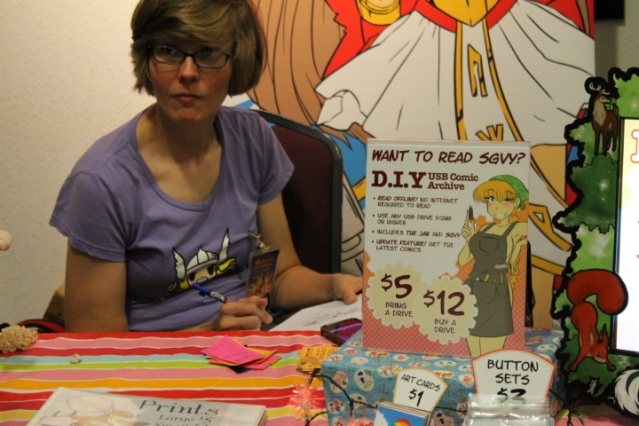 One of the panels I attended was Animated Characters with C. Martin Croker and Kevin Rubio.  And both guys has had an interesting history.  C. Martin Croker started working for Cartoon Network when it launched back in 1992.  Then he developed and animated the show Space Ghost Coast to Coast.  The show threw crazy questions to all of the guests that appeared.  And the show did whatever it wanted to capture the weird emotions in its guests.  A little known secret about the show is most of the animation came from the original Space Ghost series back in the 1960’s.

Originally Aqua Teen Hunger Force was a failed episode from the Space Ghost show.  Aqua Teen was brought back when Adult Swim launched on Cartoon Network.  And now there are around 120 Aqua Teen episodes versus 96 Space Ghost Coast to Coast episodes.  Croker said the first episodes of Aqua Teen and the episodes today are night- to-day.  It took him around four months to produce the first two episodes.  And he even gave the people a hint to watch the Paul episodes on Aqua Teen coming soon!  And Aqua Teen is animated on Photoshop while many other animated shows are animated on Flash. 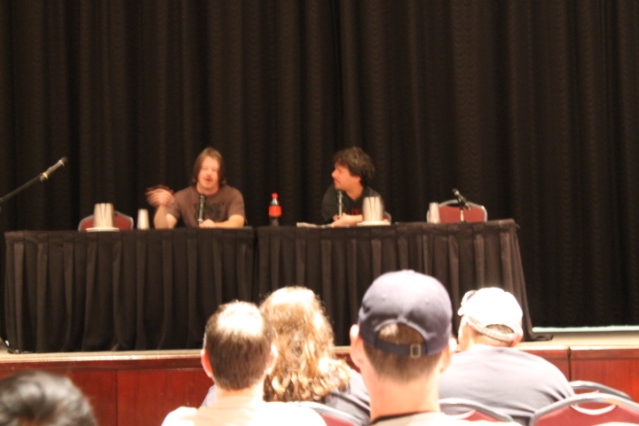 Before the end of the festival I talked to C. Martin Croker and he had some interesting animation! 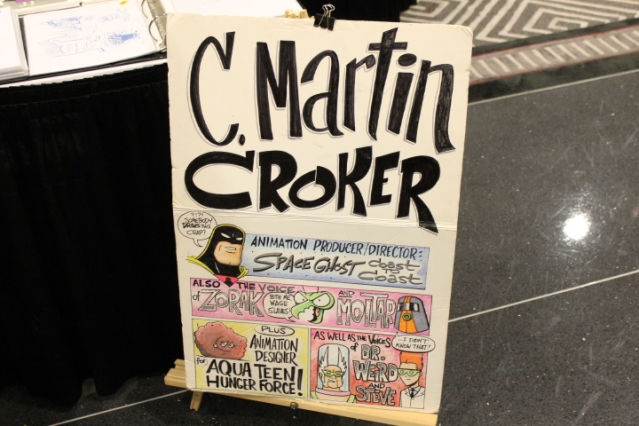 Kevin Rubio has worked for Lucas Films for 15 years.  He works on the shows Green Lantern: The Animated Series, Star Wars: The Clone Wars, and the Ben 10 franchise.   He was amazed at the great success of the show My Little Pony: Friendship is Magic and its Emmy nomination.  He loves that its grown up fans are called Bronies.  The latest show in the Ben 10 franchise is called Ben 10: Omniverse premiering soon on Cartoon Network.  One part of the show he gave away is Ben at age 16 and Ben at age 10 will meet up.  Currently there are around 38 episodes made but he could not go into detail about anything else.

Both guys gave some great advice about being animators.  Animators are good at knowing   all episodes from past cartoons.  Because they have to go back sometimes to grab images and create new stuff such as commercials and new TV shows.  In fact the Atlanta metro is home to numerous animators and shows such as Archer which is made in Atlanta.  And for all of you Animaniacs fans out there.  Sorry the master tapes are in a mine somewhere in Utah.

Next up was a couple of panels done by Kittyhawk.  Kittyhawk has done comics for around 13 years now.  The first panel was about making a comic page.  Most comics and cartoons are done on a computer now.  She recommended not to write any words on a page first.  Do the drawings and then describe what’s in the scene.  And try not to use many words on a page as well.  She also told everyone not to feel bad if you use a pencil to create your page.  But it’s now recommended to go digital.  She uses the Manga Studio EX program to create her comics.  And for anyone creating comics; “if it’s not working, toss it aside.”  A great piece of advice.  Here are some photos from this panel. 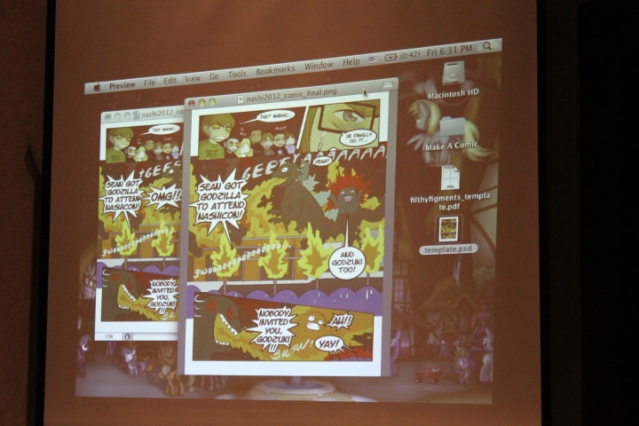 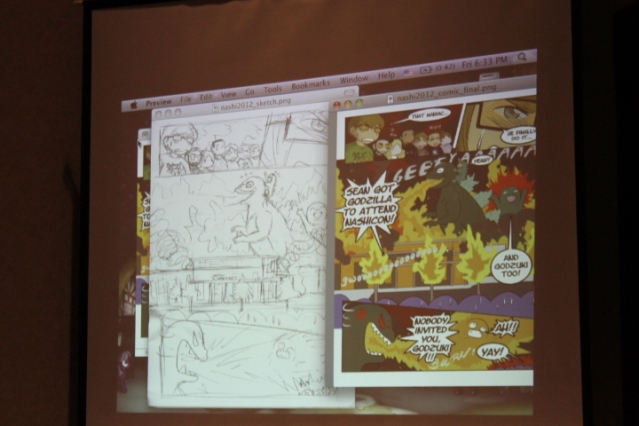 Another panel involving an animator was Page by Page with Larry Hama.  This panel with Sean Taylor was all about the comics career of Larry Hama which he got into by accident. Larry was a fan of comics when he was a kid.  And he wanted to be a fashion designer or a shoe artist when he grew up.  When he got into the comics business; he had mentors that helped him make comics.  He considered that to be “very lucky.”  Larry Hama has worked for Marvel as an editor for around 15 years.  And he has also worked for DC comics as well.

Larry Hama said that technology has changed everything about comics.  And today the internet has made it possible for anyone to learn how to make comics.  He never considered himself a writer.  And he sees comics as a story with a series of pictures.  When he was working at Marvel Comics he was one of the last writers in the editor’s bay.  And when a team from Hasbro came to him to talk about starting Gi-Joe; he said yes.  Mainly because he needed the freelance work.  And he did around 155 issues and got no reviews from anyone.

During the first meeting he was shown 10 black and white drawings with one or two words.  And somehow he made it work to the success it is today.  When the Gi-Joe movies came out he got no say about the movies.  And he was not happy when Snake Eyes talked in the movie.  He also talked about how he creates his comics.  Larry said he has no idea what’s on page three while he works on page one.  And he makes things up while he is writing and animating a comic book.  He also loved how he helped turn Snake Eyes into a mythology.  Overall it is was a great panel!

At the end of this post I wanted to share some pictures of a volunteer laying down while a mask is curing on his face. Yes this was very cool!  Notice how hard it is to separate the mask from the mold.  And the green goo that was put on people’s thumbs was to make a plaster mold thumb of themselves! 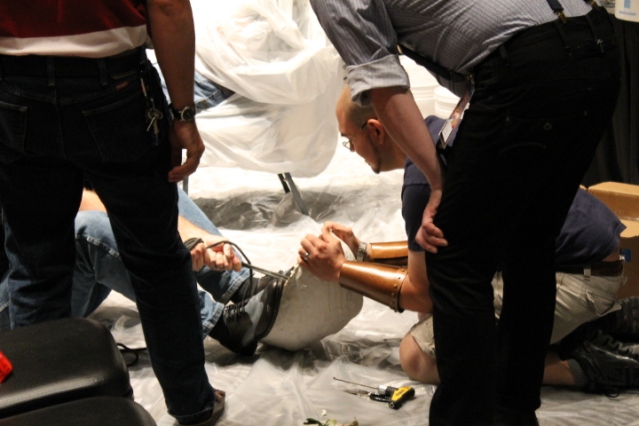 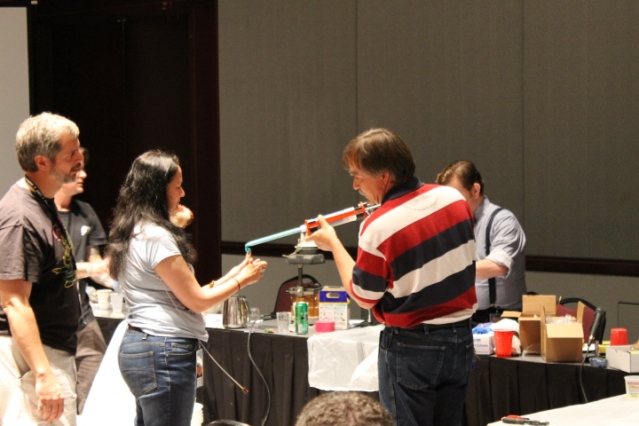