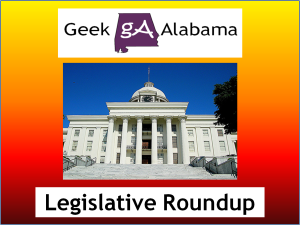 The Alabama Legislature has wrapped up the 2012 regular session.  And overall the session went very smoothly.  The budgets were approved on the last few hours of the legislative session.  We will have to see how many teachers are cut, how many state employees will be joining the unemployment line, and how many prisoners are going to be released.  The last figure I heard was around 18,000 prisoners or around 2/3 of the prison system was going to be released because of budget cuts.  Also some changes to the immigration law were passed.  But the one thing that is going to haunt the state for a long time is the failure to help Jefferson County.

The Jefferson County delegation failed to come together to pass an occupational tax bill that would have provided the revenue needed to run Jefferson County.  So now that the Alabama Legislature has failed to help the county.  All Heck is about to break loose.  The county has now said that 150 out of the 200 sheriff deputies will have to be laid off.  Also the county courthouses will have to be closed on Wednesday because of low funds.  Also more county workers will have to be laid off.  That means the lines outside of the courthouse will be much longer!

The worst part about this is all of the comments online from stories talking about Jefferson County.  Many comments say that they are glad that Jefferson County is going to get no help.  That the county has to live within its means.  Some of the comments have also gone to the extreme.  Let’s put in some white folks in there who can run things right.  Or let’s just shut down the county and let the neighboring counties annex what’s left.  Do you realize that the Jefferson County mess is effecting the entire state of Alabama.  It’s going to be harder for cities to borrow money in Alabama.  Yes this mess is going to affect you too.

Because of this mess we will likely see lawsuits from the banks against the county and the lawmakers.  And we will also see massive layoffs from the county.  And there is also no telling how many companies might leave Birmingham because of this mess.  The lawmakers need to quit acting like babies and needs to start working together to fix this mess.  As for my chances to finding a job.  Good luck with that in the Birmingham metro now.  I might as well start looking in Georgia.  I can always rename this blog to Geek Georgia.