A Day With Diane McWhorter 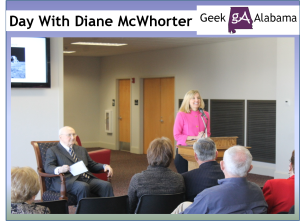 To read about the 2012 Ayers Lecture featuring Connie Schultz; click on the link!

JSU President Dr. William A. Meehan and Anniston Star Chairman and Publisher Brandt Ayers said some kind words to Diane McWhorter before she took the podium. 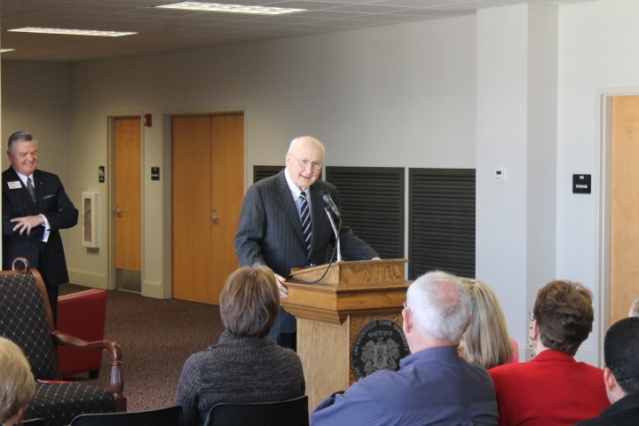 Diane McWhorter is the author of “Carry Me Home: Birmingham, Alabama, the Climactic Battle of the Civil Rights Revolution.”  This book won the 2002 Pulitzer Prize for General Non-Fiction. This book was also named by Time Magazine as one of the 100 best non-fiction books published since the magazine’s founding.  McWhorter also writes for USA Today, Slate, and The New York Times about race and civil rights history. 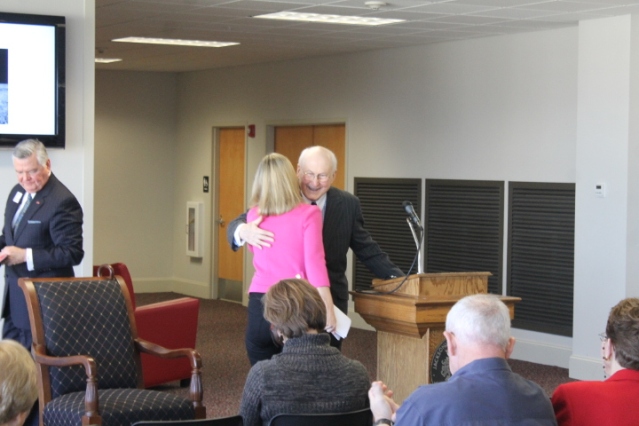 Diane McWhorter is always obsessed for bad things to happen.  And yes, it does get on people’s nerves.  McWhorter talked about her trip to Germany and the visit to the  Buchenwald Concentration Camp.  She visited to conduct research for her upcoming book about Nazi rocket scientists like Wernher von Braun, who immigrated to America to become heroes of the Cold War.  Yes, there were former Nazi guards who moved to Huntsville, AL to work for NASA.  She even took her daughters to Germany to see the former concentration camp.  She wanted her daughters and other people to look at the victims eyes.  And the eyes of the guards doing the torture. 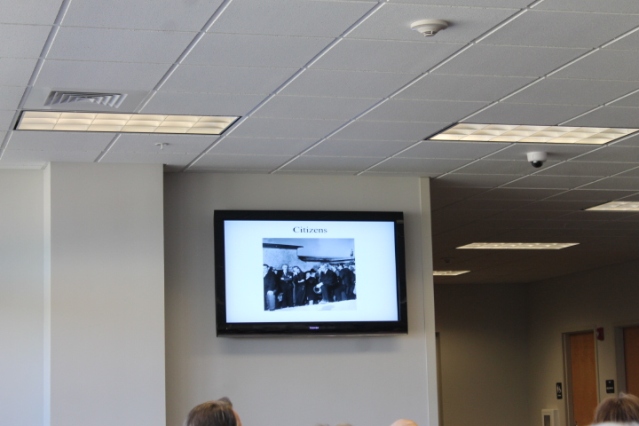 Several photos were shown during the event.  The photos above showed the citizens in Germany turning their heads away from the torture.  Many people feel the civilians in the picture above were disgusted by the acts, but McWhorter believes they were upset more that they were forced to look at what they allowed to happen.

The book “Carry Me Home: Birmingham, Alabama, the Climactic Battle of the Civil Rights Revolution” is about Birmingham during the 1960’s Civil Rights Movement.  Back then, people were shocked to hear of white people growing up on the wrong side of town.  The City of Birmingham took the position that black people were rioting and the riots were staged.  During the protests, Fred Shuttlesworth used school kids.  And the Birmingham News refused to print images from the protests because it would make the city look bad.  One of the questions was why white people were participating in the bad system.  Just like George Wallace and Bull Conner. 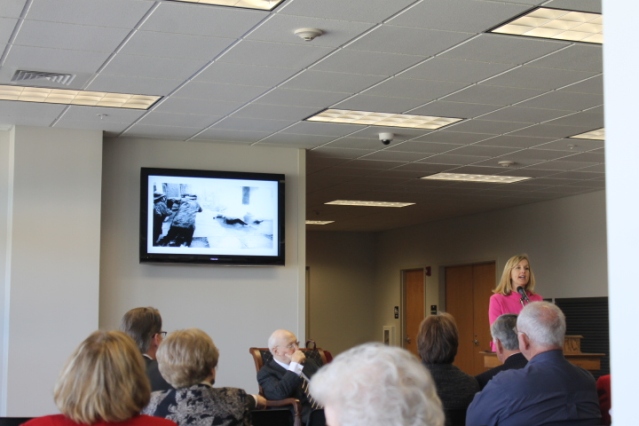 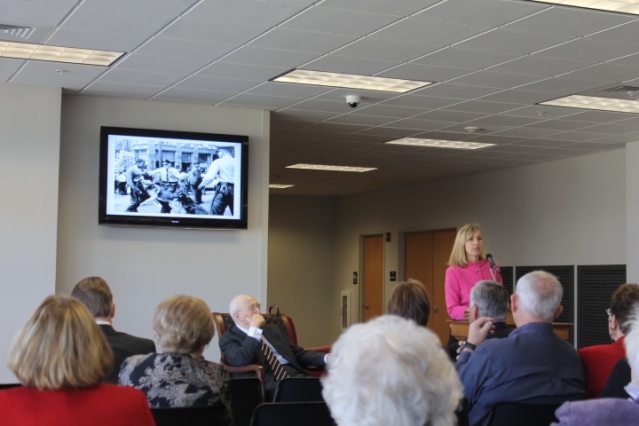 During the protests, Birmingham was called “Bombingham.”  Miners and workers from U.S. Steel used dynamite during the protests.  U.S. Steel and the manufacturing industry wanted to maintain white clan power as well as keeping wages low and preventing unions from forming.  When the Freedom Bus was bombed in Anniston, it was not the end of the violence.  When these riders got to downtown Birmingham, they were attacked!  The Birmingham Police gave the white clan 15 minutes to do whatever they wanted!  And sadly, the FBI was involved in the violence as well. 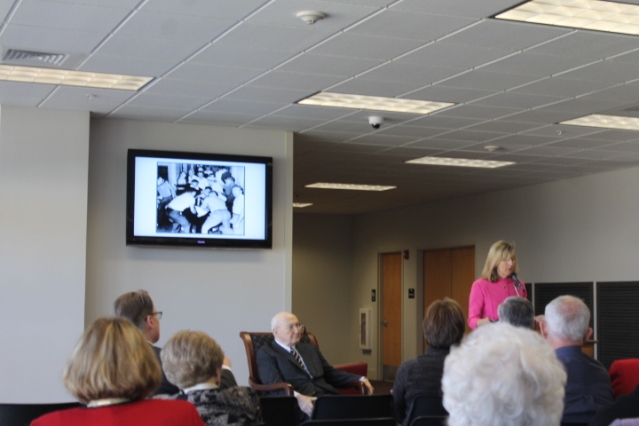 One of the most shocking things; Birmingham police chief Bull Conner ordered the assassination of Fred Shuttlesworth.  And a shield was put in to prevent criminal prosecution of white people.  The violence did not end after President Kennedy signed the Civil Rights Act.  On September 15, 1963, the 16th Street Baptist Church was bombed killing four girls. 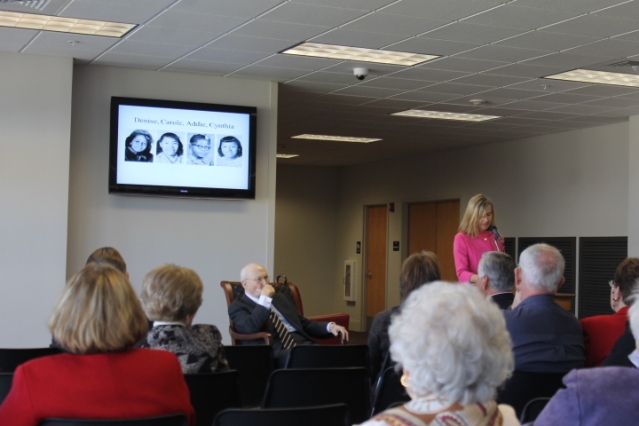 McWhorter says segregation stopped working, and “that’s when Birmingham caved.”  The media tried to expose the corruption by using fancy electronic equipment to interview Bull Conner and others.  McWhorter said the truth of living through this was much scarier.  And there was a conflict between good and normal instead of good vs. evil.  Today, Alabama is still going through some racism.  It’s not from black people, it’s from Hispanic people.  McWhorter compared the H.B. 56 Immigration Law to the civil rights violence in the past.  “It’s not Jim Crow, it’s Juan Crow” said McWhorter.

McWhorter is ashamed about why it’s harder to do things for the right reason instead of a profit reason.  She also talked about the torture of terrorists and why that was wrong.  When you think of cities in Alabama with a racism past.  You think of Birmingham and Selma.  But you can also add Huntsville to the list.  I still can’t believe that former Nazi guards were helping to put people on the moon. 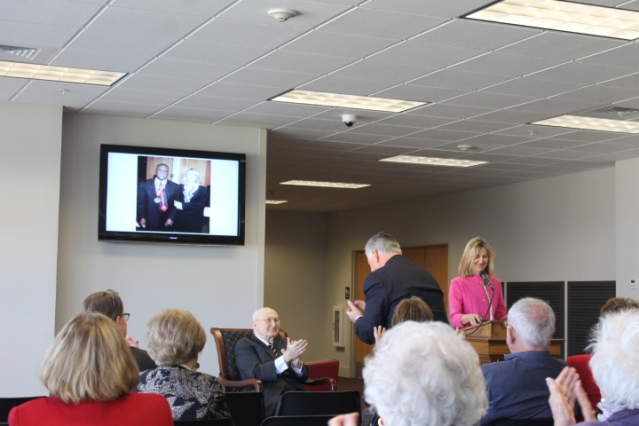 McWhorter urged the journalism students to keep their eyes wide open and to take notes.  This is something we all can follow!  Before the event wrapped up, Diane McWhorter answered a couple of questions from the audience.  One of the questions was about the Supreme Court case where Shelby County is trying to overturn Section 5 of the Civil Rights Act.  She called Shelby County as white flight south.  She even suggested that God is punishing them with horrible traffic jams.  She argued for the case of keep Section 5 because it would prevent state legislators from discriminating against race and class. 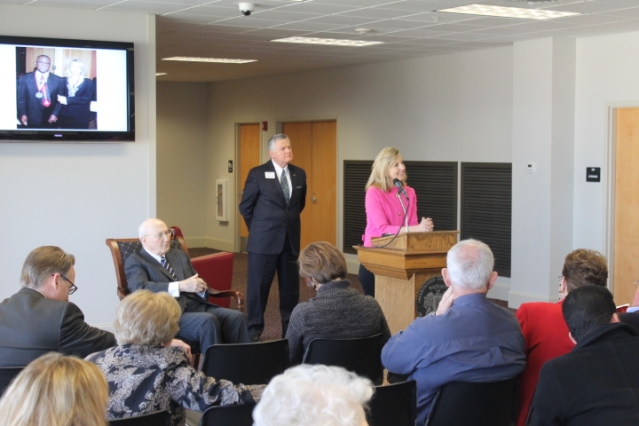 McWhorter believes there is no such thing as a post-racial society.  The issues today are not about race, it’s about capitalism, money, and politics more than race.  She feels like people are afraid to stand up to corruption today.  And this country has a long way to go before realizing MLK’s dream.  Especially about poverty.  McWhorter believes we still see corruption in government today.  And she fears public corruption will get worse as the free press like newspapers keep on shrinking.  To wrap up her speech; McWhorter said “without competition, journalists don’t do very well!”  So true!

To watch the Ayers Lecture series with Diane McWhorter; click on the link! http://qik.com/video/57678701

Its not everyday a medical helicopter has to land in a parking lot.
A big lunchtime meal at Cookout is always good!
I guess some idiots out there have nothing to do better than spraypainting over stop signs.
We some unique one lane bridges around here.
There is one thing common about Alabama politicians. One, many of them are corrupt. And two, it seems like many of them end up in prison, like this Alabama politician here. Why write a book about it?
My new Power Smokeless Grill is doing an amazing job!
Oh oh, that school sign is turned in the wrong direction.
So will the NFL ever change their overtime rules or will they keep screwing the New Orleans Saints forever?
Here is something very unique about those using military time and the year 2020!
Here's my #2019topnine. A lot of favorites related to my #TheEmployables TV appearance and @geekalabama!
What is it with fast food joints and mac and cheese lately? Arby's brought it with their white cheddar mac and cheese. Very thick and creamy!
So, I thought the latest Star Wars was good. But come on, I want a movie where all the good guys die and the bad guys win. I was rooting for the bad guys in Star Wars.
Merry Christmas everybody!
Hey look, its a rare site. Walmart has closed for Christmas. And people are still driving up and a police officer is on a loudspeaker telling people its closed.
Does my new road sign look real nice where I park my car at?
Finally tried out Buffalo Wild Wings today. Their Asian Zing wings were great, and their cheeseburger was also good. I hope they come to Anniston/Oxford soon!
I just went inside the cave for Santa's Underground Workshop at Rickwood Caverns State Park, what a great experience!
I have now successfully completed mailing out all of my Christmas cards, glad I ordered more this year. Guess being on TV means more demand!
Here I am about to cover the Christmas at the Falls Christmas attraction at Noccalula Falls Park in Gadsden.
What happens when you make certain Oxford city officials angry at you for covering major traffic issues? You go to a bar and say "cheers!"
%d bloggers like this: