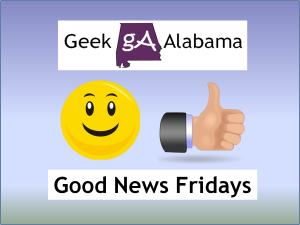 Sometimes during the Good News Fridays post, I like to talk about some good things I have seen on TV or online.  This first video shows the second million dollar winner from Wheel of Fortune.  Autumn Erhard solved the puzzle “Tough Workout” and won the million dollar prize!  To even have a chance to win a million dollars, Erhard had to land on the one million dollar grand prize wedge during the show, solve that puzzle, make it to the Bonus Round without hitting bankrupt, spin the wheel and land on the million-dollar card (the bonus wheel has 24 slots with prize cards) and then solve the final puzzle in the Bonus Round.

I could not believe Erhard even solved this puzzle!  Here’s video of that moment when she won a million dollars!

And now, this video which is approaching five million views and I think that is great!  A kid’s Cymbal instrument breaks during a performance of the Star-Spangled Banner.  So what does this kid do next?  Watch the video and be happy!