Catch The Premieres Of Muppet Babies And My Little Pony: FIM Season Eight 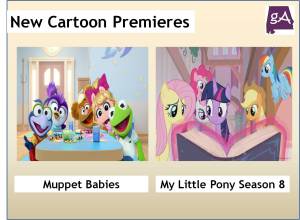 This weekend there are two cartoons that have premieres!  First, a reboot of a classic popular cartoon finally premieres.  Disney Junior is premiering Muppet Babies for a new generation.  Just like in the classic series, this rebooted series will feature Kermit, Piggy, Summer, Fozzie, Animal, and Gonzo going on playroom adventures.  Also, you will get to see stock footage in the background in some of the adventure scenes, that’s what made the classic series very popular. Here is the description!

The MUPPET BABIES are here to make dreams come true! Join Kermit, Piggy, Fozzie, Animal, Gonzo and Summer on all their playroom adventures! Whether they’re building a time machine, blasting off into outer space or watching Gonzo launch himself out of a cannon, the sky is definitely NOT the limit for the Muppet Babies! Along with the help of Miss Nanny, the Muppet Babies will use their imaginations to explore their playroom and beyond!

Muppet Babies airs its first two episodes at 9 am and 12 pm Central Friday, March 23rd on Disney Channel.  Have a look at the new series below!

Also, I can’t believe we are at the eighth season now, the popular cartoon My Little Pony: Friendship Is Magic is premiering.  For season 8, Princess Twilight and the rest of the Mane 6 are opening a School of Friendship.  This new school will feature creatures from all across Equestria and beyond to learn the values of friendship.  Here is a description!

Season 8 premieres on Saturday, March 24th at 10:30 am Central on Discovery Family.  See some videos below!