A Day with Connie Schultz

When you do not have a job right now.  Yes it has been over seven months now since my last job.  And I am still looking for my 14th job in the last six years.  You have plenty of time to do things.  Thanks to the Anniston Star I learned that columnist and Pulitzer Prize winner Connie Schultz was going to be at the Houston Cole Library at Jacksonville State University.  So I did go and I am glad I did.  Lots of people turned out to hear Connie Schultz speak about her life and columns.  So I am going to show off some pictures and things she said.  First I want you to play a game.

By the way the Houston Cole Library has some great views of the surrounding town.

JSU President Dr. William A. Meehan and Anniston Star Chairman and Publisher Brandt Ayers said some kind words to Connie Schultz before she took the podium. 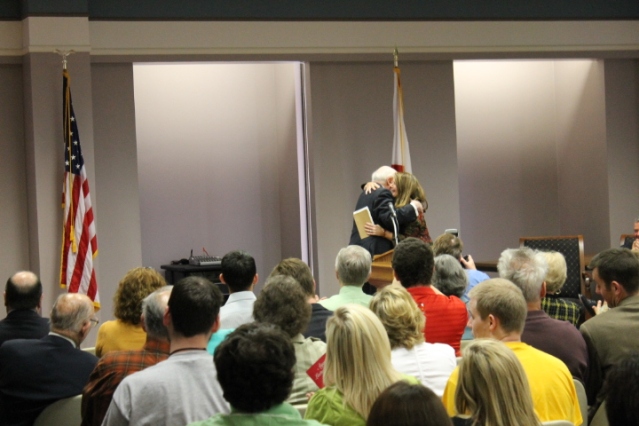 Connie Schultz revealed she reads her finished columns to her dog before she submits it.  A very interesting way to review your writings.  She gave some great comments to the JSU students and said they are bright beacons and she loves the kids.  She talked about how tough it is for female writers to get into the journalism business.  She has had to deal with negative opinions from some people.  She also said that all people are in common no matter what your political view is and I agree with that.  One of her memorable quotes is “What they call you is one thing.  What they answer to you is something else.” 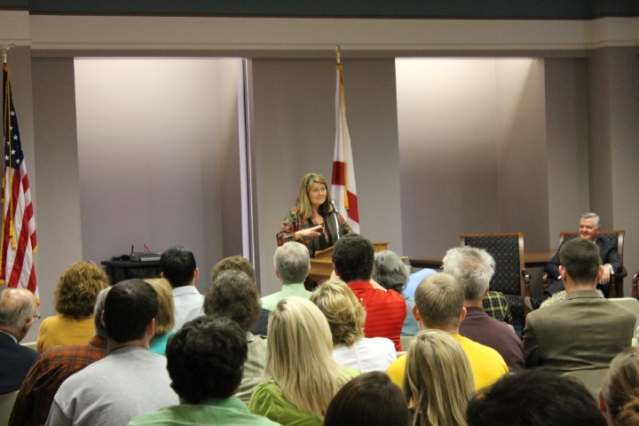 She talked about her childhood and she really loved her parents.  In fact her parents died in their 60’s because they wore their bodies out.  Her parents worked very hard so the four kids can have a successful life.  She gave some advice for women dating men.  “Don’t marry him until you see how he treats a waitress.”  She also gave some advice to all the bloggers and writers out there.  You need to write some personal stories and columns. That is her best piece of advice she has gotten from people.  “If you write personal columns people will be calmer at you”; Schultz said. 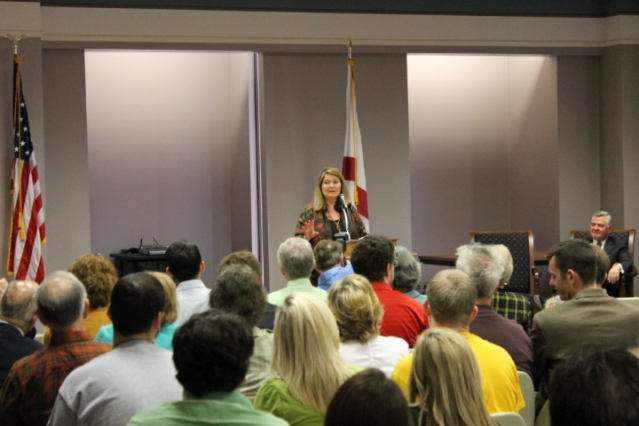 Her saddest day of her life is when she had to put down her first dog.  And she is an activist for journalism and it is not a comfortable role for all of us.  She is grateful many small papers in the south including the Anniston Star has taken a chance on carrying her columns.  She also gave some political advice and said the country is full of good people.  And if you want Washington to work again the voters need to punish the extremists from both parties.  I agree with that!

She gave some great comments and advice to young adults.  She called them the most idealistic; socialistic generation since FDR.  And younger people are entitled to having an opinion.  She also told young people to not give up.  Give yourself some breaks and we have too much hurry in life.  Sometimes young people need to put down technology and have some face to face time.  She gave everyone caution to please embrace values in traditional journalism.  And she also told the crowd to tip people with cash.  Because if you tip them with a card some of it will be charged off.

Schultz said “you want to be the person to trust.”  She told the crowd that companies and writers needs to embrace social media and she wants all comments to not be anonymous.  Facebook comments are the best because you have a name behind the comment.  This stops the trolls and rumors from people who are hidden.  She also said that newspapers are having trouble right now and journalism is a group endeavor.  And that journalism will get through the storm and emerge stronger than ever.  The power of journalism is huge and Americans want to do the right thing but they don’t know how.

Connie Schultz told the crowd that everyone is full of stories.  How many Americans share their stories?  And that nothing will replace a good story.  Stories need to be told like a good song that people hum in their heads.

Connie Schultz lives in NE Ohio and is a columnist and author.  I introduced myself and told her about my grandfather Peter Young who lives in Hudson, OH.  She is familiar with the name so that kind of shocked me.  I am glad she came down to Alabama and she gave a great speech and I will keep reading her columns.  By the way did you find where my car is?